Despite sharing a name, it took more than 30 years for father and son Larry King and Larry King Jr. to meet in person.
By Paul Guzzo

As a child growing up in Miami, the closest Larry King Jr. got to his famous father was attending Dolphins games in the Orange Bowl when Larry King was the radio broadcast’s color commentator.

“I’d listen to him on the radio and look up in the press box with binoculars to see him,” said King Jr., 59 and a Tampa resident since the 1990s. “I was that close, but miles apart.”

Because his parents divorced before he was born, they would not meet in person until King Jr. was in his 30s.

He chooses to focus on the present. Today, they’re best friends.

“This is what I always wanted,” King Jr. said. “Hearing his voice on the phone never gets old.”

Next up for the father and son: opening a pizza place together.

Called Kings Pizza, it will be headquartered inside the Tavern restaurant that is part of the Club at Cheval owned by King Jr.

The Club at Cheval includes a fitness center, tennis courts and a semiprivate 18-hole golf course, all owned by King Jr. and located within Cheval, the gated community in Lutz.

The two hope pizzas are baking by the end of the first quarter of 2021.

The senior King, 87, is currently recovering from COVID-19.

He “is receiving great medical care from his doctors, who plan to keep him under observation for the time being,” King Jr. said. “My brothers and I stay in touch with him via video calls on a daily basis. He is very appreciative of all the people around the world wishing him well and he looks forward to being home soon.” Larry King at the the 45th International Emmy Awards at the New York Hilton, in New York in 2017. [ Courtesy of Andy Kropa/Invision/AP ]

Before the diagnosis, King expressed excitement about going into business with his namesake.

“I have lent my name proudly to Kings Pizza and can’t wait for everyone to try it soon,” King, who lives in Los Angeles, told the Tampa Bay Times via email through a representative. “Being with him in his adult years has been a blessing. While I cannot take credit for how he was brought up by his mom, I am proud of what he has become in his life.”

King Jr. said his parents met in Miami in 1958, when the future host of CNN’s Larry King Live was new to the broadcasting business.

His mother, Annette Kaye, was at a bowling alley and his father was there to conduct man-on-the-street interviews. King approached Kaye for an interview, but then asked her out.

“I wouldn’t be surprised if he pretended to be there interviewing people for a story,” King Jr. said with a laugh, “just to meet her.”

Their union lasted less than a year.

Kaye, who had two daughters from a previous marriage, was pregnant during the divorce but told King she would name the child after him if it was a boy. Decades later, King would tell the media that he never heard from Kaye about the November 1961 arrival of his son.

King Jr. believes his father’s career is why his mother did not push for an introduction.

“My mom knew my dad’s career was erratic,” he said. “I think my mom recognized that early on and thought if I was associated with that it could be really bad. My dad had moved on. He’d been married a couple of times, already had some other children … My mom never came after him. So he thought, ‘She’s not saying anything. I’m going to move on.’”

Still, as King Jr. grew older, he wondered why his dad never called or why in interviews King mentioned children from another marriage but not him.

He said his mother would tell him, “He’s not ready for you yet.” And, “For now, you need to be your own person.”

“She’d promise we would meet when the time was right,” King Jr. said.

That time came in 1992, but was bittersweet.

Diagnosed with terminal brain cancer, his mother sent a letter to King explaining her dying wish was that the father and son get together. 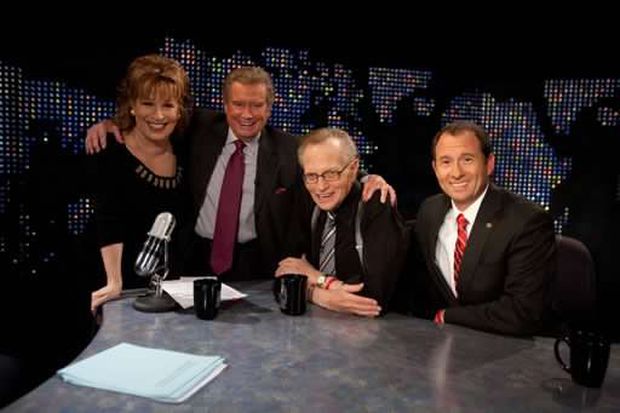 They met at the Omni Hotel in Miami. King Jr. said the early conversation was reminiscent of a Larry King Live interview.

But when King understood that his son didn’t harbor anger, King. Jr. said the conversation turned from professional to comfortable.

“He realized I’m not there to ask, ‘What did you do? Why weren’t you there for my fourth birthday?’” King Jr. said. “It was more important to go forward.”

He was later introduced to his father’s other children, Andy and Chaia King, welcomed King’s youngest kids, Chance and Cannon, into the world in 1999 and 2000, and described his dad as an “active grandfather” to his three children, Asher, Max and Stella.

At his father’s request, King Jr. ran the Larry King Cardiac Foundation from 2005 until 2011, when he purchased Cheval’s fitness club. He took over the golf course in 2015.

“Indulge me a moment to brag about my son, Larry Jr.,” King wrote on Facebook in 2015. “I’m so proud of him. He bought and totally renovated Cheval Golf & Athletic Club (in Tampa Bay, FL) 5 years ago … in turn, raised the property values of the surrounding area. Way to go Lar!”

When Andy and Chaia King died within weeks of one another in 2020, from a heart attack and lung cancer, respectively, it was King Jr. who helped his father through that tough time.

“My son Larry Jr. has been a rock for the family,” King said. “I have enjoyed watching him grow into a heck of a businessman but, more importantly, a great person, always giving and caring for others.”

They try to talk daily, King Jr. said, especially since they decided to start the pizza place in Cheval. And they plan to expand throughout the Tampa Bay area.

They agreed it had to be Brooklyn-style pizza, and King Jr. sent samples to his father in Los Angeles for approval. They regularly bounce marketing ideas off one another.

All of this, King Jr. said, is fulfilling the final wish of his mother, who died in 1994.

“Pretty much her last words were, ‘I gave you 33 years of my life the best I could. It’s time for your dad to be there for you.’ And he has. He has been there for me every step of the way.”
SOURCE:  tampabay.com
Share Tweet Share Pin

The Club at Cheval is “the place to be” for golfers, families and fitness lovers in Tampa Bay! Contact us today to learn more about becoming a Member!

© 2021 The Club at Cheval. Powered by foreUP Marketing Services